That’s going to be a lot of candles.

On September 15, 1956, Christian County Library opened its doors to the community. With a staff of three and a collection of about 14,000 materials, the library began its mission to provide literary resources and services to all of Christian County. Over the years, we have grown and adapted to meet the needs of the community, including adding more branch locations, extending hours, expanding the collection and variety of resources and hosting events, trainings and reading challenges—but we are just getting started!

You don’t turn 65 every day, so we want to celebrate and everyone is invited! Mark your calendars, because on Wednesday, September 15, 2021, we are having a party. Visit any Community Branch Location for cookies, giveaways, crafts and history displays. While you’re here, don’t forget to sign the guestbook and tell us your favorite library memory.

Our goal has always been to engage the community through expanding access to innovative community-driven facilities, services, lifelong educational opportunities and a space to build community. For 65 years, the library has remained a space for the people of Christian County to learn, explore and create fellowship with others. We hope that everyone can join us as we continue to make history by visiting the Community Branches, taking part in events and programs and giving feedback on how the library can better serve your needs. Because the library wouldn’t be a library at all without you. 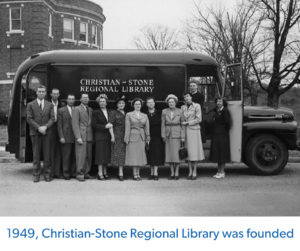 In the 1940s, the Missouri State Library hosted bookmobile demonstrations in rural areas without public libraries. The State Library stocked, staffed and funded these bookmobiles for one school year to promote library services to residents.

Based on those demonstrations, in 1949 the Christian-Stone Regional Library was created and funded by a tax levy that passed by more than a two-to-one margin. 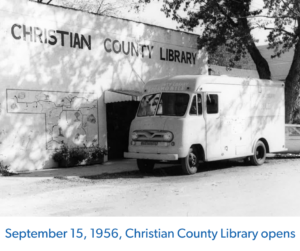 The headquarters of the Christian-Stone Regional Library was established in the city of Galena, located in Stone County. To help distribute library services, in 1952 the Christian County Reading Center and workspace was created in a livery stable located off the Ozark city square.

To better serve their own unique communities, the Christian-Stone Regional Library split to form two independent county libraries in 1956.

On September 15, 1956, the newly formed Christian County Library opened its doors for the first time. The 2,000 square foot building included offices, workspaces and 14,000 books. Led by Librarian Lucille Anderson, the Executive Officer, the library operated five days a week and was closed for two weeks each June for staff vacations. 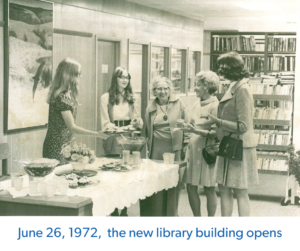 Based on money provided by the approved tax levy, the Christian County Library provided library services for the county on about $14,000 a year and circulated over 74,000 items a year.

By the mid-’60s, the library was running out of room to shelve materials and the building was in need of major repairs, all while circulation numbers continued to increase. In order to continue providing a high level of service to members of the county, additional funding was needed. 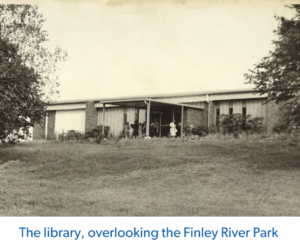 With the tax levy increase, in addition to money awarded from the Library Services and Construction Act and land donated from Howard Garrison, construction began on a new library location.

In January of 1973, Lucille Anderson retired and Marilyn Prosser stepped in as the second Executive Officer for the Christian County Library. 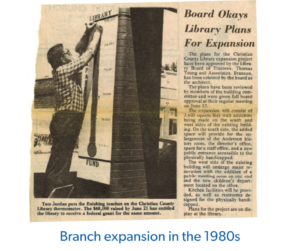 C.C. Bookworm was adopted as the library’s mascot and emblem in May of 1975.

For her dedication and commitment to the library, the local history room was renamed the Lucille Anderson History Room on August 23, 1975.

The technology needs of patrons changed in the late ‘70s. In response, the library added their first photocopy machine and microfilm reader. 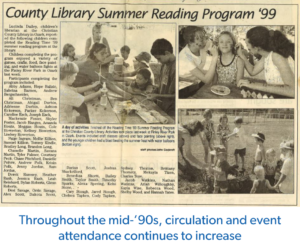 At the end of 1980, a fundraising committee was formed to raise money for more expansion to the library location. Members included library staff, library trustees, county representatives, Friends of the Library members and other community members from Nixa, Sparta, Clever, Chadwick, Highlandville, Spokane and Ozark.

The Christian County Friends of the Library was formed in 1982 with the purpose to bind together all citizens and groups in the county to help develop public awareness of library services and to assist with special programs and events.

In September of 1985, the library held a groundbreaking ceremony to add 3,000 square feet to build a meeting space, children’s area and new main entrance.

Library leadership changed again with Nancy Howard stepping in as Executive Officer in December of 1986, followed by Mabel Phillips as Executive Director on August 24, 1987.

To better serve the community, in 1988 the library added the Early Learning Center, telephone and fax lines and was awarded a MacArthur Foundation Grant that provided funding to start a video collection. 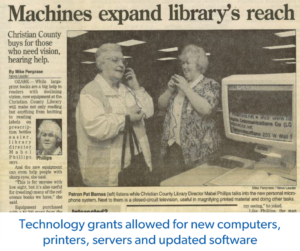 Throughout the ‘90s, circulation numbers increased to yearly checkouts of over 65,000 materials and over 500 children’s programs and events presented.

The addition of audiobooks in 1996 and the conversion to a digital catalog provided the steps needed for the Christian County Library to become one of the original members of the Consortium of Ozarks Libraries, offering a more robust interlibrary service in 1998. 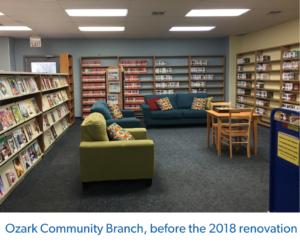 Upgrades to library computers were made possible with a Gates Foundation Grant in 2001 that allowed for new wiring, computers, printers, servers and updated software. Also that year, the library registered the domain: christiancounty.lib.mo.us

Partnerships to establish satellite return and pick-up locations began in 2005 with the Nixa X Center and later included spots in Sparta, Highlandville and Billings.

Discussion and plans began for three future library expansion scenarios in July 2007, focusing on Clever and Sparta. Land was purchased off Highway 14 in these cities for future library branches.

The Sims Family donated money to the city of Clever, earmarked for library services for the community. The city and library partnered to provide library services and resources in late 2010. 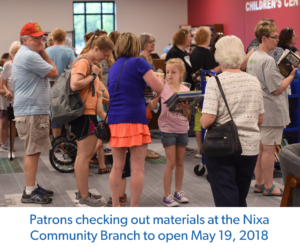 In November of 2011, the library joined MOBIUS (Missouri Bibliographic Information User System) to provide access to materials from academic, public and special libraries across the state.

In June of 2013, the Christian County Library Foundation held its first meeting. Their mission was to increase access to programs and services the library provided through fundraising efforts.

Library leadership was handed off to Geri Godber in November 2013, making her the 5th Christian County Library Director after the retirement of Mabel Phillips.

In early 2017, the library adopted a new book stack logo and webpage.

Efforts to expand library services and locations became possible after a tax levy increase was approved by community members after the third attempt in August of 2017. 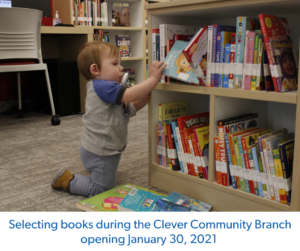 Remodeling and construction began in 2018. The Nixa Community Branch held its grand opening on May 19, 2018, and the Ozark Community Branch re-opened on August 11, 2018, after an extensive remodel.

Access to reliable internet was a need the library continually strived to meet. In June of 2019, wifi hotspots were added to the collection, providing free and stable internet to patrons’ homes.

On March 18, 2020, following stay-at-home orders, all library branches and partner pick-ups closed due to COVID-19. The library began offering Virtual Events and expanded its online services.

Plans were approved for the construction of the Clever and Sparta Community Branches after 12 years of preparation, with both branches sharing the same layout and design and each having approximately 5,100 square feet of space. Built simultaneously, construction for the Clever location began in April of 2020 and for the Sparta location in June of 2020.

On January 30, 2021, the Clever Community Branch opened its doors, and director Geri Godber stepped down as library director. 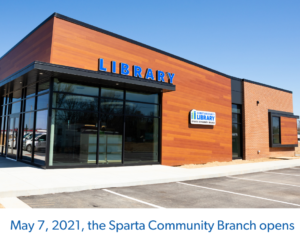 The library added new items to its collection, including musical instruments made possible by a grant from the Finley River Community Foundation in April of 2021.

On May 7, 2021, the Sparta Community Branch opened its doors, meaning the library now provided access to four branches across the Highway 14 corridor, with 95% of the Christian County population being within just ten miles of a library.

Today, based on money provided by an approved tax levy increase, the Christian County Library provides library services and resources for the county each year on about $2.5 million, with over 166,000 patrons visits, more than 533,000 physical and virtual materials circulated, over 84,000 physical and 930,000 digital items in the collection and a whopping 28,000 patrons attending library programs and events.