Ever stare out the window and watch the birds hop and play in the yard? Then you have the exact qualifications to become an official participant of Project FeederWatch!

Located outside the CCL Ozark Branch are four bird feeders. Each bird feeder is filled with birdseed in hopes to attract all the native and migrating bird species in the area. Every Monday and Tuesday morning from 8:30 a.m. till 10:30 a.m. in the Netzer meeting room at the Ozark Branch use those practiced birdwatching skills to observe, identify, and count the birds that stop in for a meal. 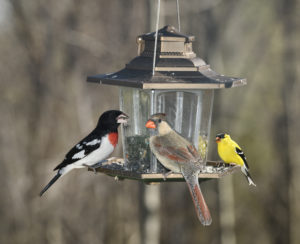 Project FeederWatch is conducted by the Cornell Lab of Ornithology and is part of a growing trend of scientific research called citizen science. A citizen scientist is an individual who voluntarily contributes their time and effort toward scientific research in collaboration with professional scientists. By teaming up with citizens, scientists have found that their research yields broader and richer results which adds to our collective understanding.

The data collected for Project FeederWatch allows scientists to determine different migration ranges from November to April and the changes that occur from year to year. With that information they are able to determine if a bird species is in decline, identify the possible reasons why, and make recommendations for recovery before it is too late.

Last year in the state of Missouri the top three birds counted by the Project FeederWatch were the Dark-eyed Junco, Northern Cardinal, and Downy Woodpecker. But, will that remain the same for this year? Become a citizen scientist and find out! There is no minimum time required to participate and we supply the coffee, bird guide books and newspapers. We can also help download bird identification apps on your smartphone or tablet.

Project FeederWatch at the Ozark Library may not be your traditional library program, but that’s the point. So, next time somebody asks “what did you do today?” the response could be “I submitted data to Cornell University for the scientific research of feeder birds. What did you do?”

A special thank you to the Family Center Farm and Home in Ozark for donating the birdseed. For more information about Project FeederWatch and other library events, call the Christian County Library at (417) 581-2432.